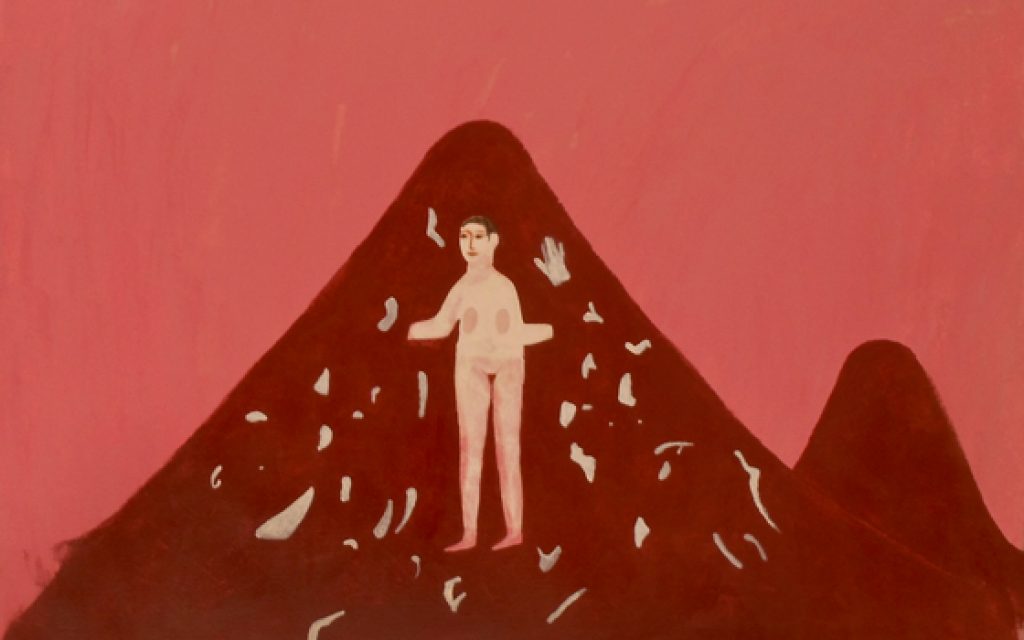 Jumana Emil Abboud, I Feel Nothing, 2012-13. Pencil and watercolour on paper. Courtesy the artist.

Delfina Foundation produced Points of Departure, an exhibition that culminated a year of collaboration with ArtSchool Palestine, the British Council and the Institute of Contemporary Arts (ICA). Presented at the ICA, the exhibition was among the highlights of the 2013 Shubbak Festival in London (22 June – 6 July).

Points of Departure began as a set of thoughtful explorations into the phenomena of liminality. A condition in which one’s sense of identity is diffused, liminality leads not only to states of dislocation and disorientation, but also to new perspectives. From this starting point, all the exhibiting artists undertook research-orientated projects in the UK and Palestine, seeking to make meaning, and create new narratives, in response to urgent contemporary questions around nationalism and identity, history and place.

Points of Departure presented new commissions by Palestinian artists, Bashar Alhroub, Bisan Abu Eisheh, and UK artists Jeremy Hutchison and Olivia Plender – all of whom undertook eight-week residencies in London and Ramallah respectively. In relation to themes raised by the project and the works produced, the exhibition also featured a seminal work by Ramallah-based artists Basel Abbas and Ruanne Abou-Rahme. The exhibition was curated by Rebecca Heald with the support of Mirna Bamieh and exhibition design by Jan Pfeiffer.

Points of Departure included an extensive public programme of talks and events. For full details of these past events, please visit our News page.

Bisan Abu-Eisheh’s installation acts as an introduction to the exhibition. Intrigued to hear how the British participants in the exchange described their experiences of Palestine, his piece Welcome to Palestine explores the recounting and portrayal of Palestinian geographies. The installation is centred on an analysis of a heavily biased guidebook Jerusalem, Israel Petra and Sinai that contains minimal amounts of Arabic history and key phrases only in Hebrew. The guidebook is filled with comments and notes contributed by the audience during the first presentation of Points of Departure in Ramallah.

Bashar Alhroub continues his distinctive investigation into the relationship between memory and place. For his video entitled Attaba (meaning ‘threshold’ in English) Alhroub presents the site of his residency as one infused with personal memory and attachment despite having no past relation to it. His series of figurative collages, composed of amassed paper materials from his daily excursions in London, become records that transfer public experiences to a private context.

Jumana Emil Abboud’s work relates directly to ritual, anthropological theories of the liminal. Entitled I Feel Nothing, her installation, made up of drawings, photographs and a performance video, investigatescultural notions of touch, and how it can be read both in psychoanalytical and metaphorical terms. The National Gallery’s Noli me tangere by Titian, the famous depiction of Christ appearing to Mary Magdalene at his burial tomb, is the starting point for Abboud’s research on related folklore, fairytale, sacred sites and objects.

Olivia Plender’s two-channel video installation, Blind Eye, explores questions of visibility in relation to the narration of history. The dynamic that the work creates is one in which the authority of the museum as a setting, and the ways in which it confers ‘legitimacy’ on a story, is contrasted with other more embodied methods of describing the history and the contemporary culture of a place. Within the installation she sets up a relationship between a playful situation where a group of young actors rehearse a scene, questioning and exploring their physical gestures and everyday movement, and footage from The Tawfiq Canaan Collection of Palestinian Amulets, which is held at Birzeit University in the west bank.

Through the manipulation of manufacturing and commercial modes of production, Jeremy Hutchison engages in what he terms “rituals of sense- making”. Collaborating with employees in factories and supermarkets in Ramallah and Nablus in orchestrating a series of actions, Hutchison creates situations that embrace confusion and propose alternative kinds of logic within commercial environments. In a jeans factory for example, Hutchison asked the workers to make jeans that somehow expressed what it was like to be someone making jeans in Nablus. The result is a series of unwearable, awkwardly shaped visual metaphors presented as part of an immersive installation, which questions the semblance of normality Hutchison experienced during his time spent in the West Bank.

Basel Abbas’ and Ruanne Abou-Rahme’s installation The Incidental Insurgents is a gesture towards the present as a moment between crisis and potential for change. Taking the figure of the bandit, in its many returns and echoes over the last hundred years, the artists present an investigation into the possibilities of the future. Abbas and Abou-Rahme ask how this time of radical potential can be inhabited, and what we can take from the past and use to imagine the next chapter.

Installation photos from off-site group show at the ICA