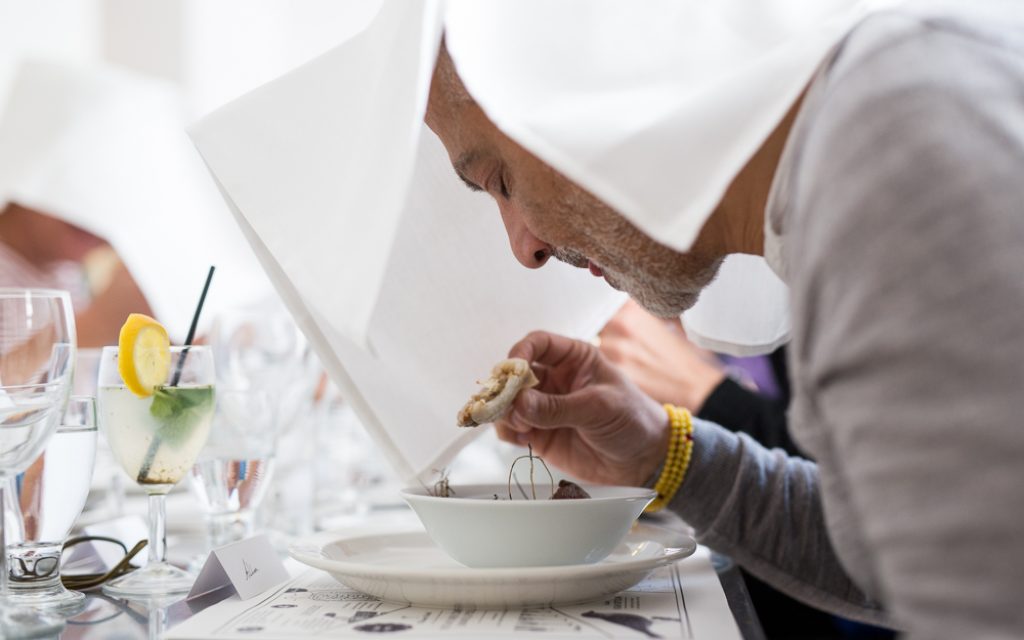 The Wedding Project encompasses a pop-up Absolut Elyx lounge serving continuous offerings of novel drinks and dishes as well as a banquet hall hosting seated, time-based performative meals that unfold across interconnected rooms of the hotel, which are typically used as venues for executive meals, business conferences and weddings.

Inspired by a tenth century Arabic text that describes multiple different words that define ‘love’ and it’s wider meanings, eleven concepts will be embodied in a subtle and sensational performance, provocation, food or drink. Beginning with hawa (attraction) and progressing through ‘alaqah (attachment) to kalaf (infatuation) to huyum (insanity), each dish – produced in collaboration with the culinary team at Madinat Jumeirah – will explore the notion of food, recipes and cookbooks as markers of cultural memory that can be just as easily erased as they are preserved.

Guests will be welcomed into an edible garden conceived by the artist Sunoj D which acts as the source of ingredients for the bar, where lemons, lime, mint, and other garnishes are picked for drinks. As a comment on consumption and our relationship with waste, the garden will not be replenished throughout the week. The lounge features specially commissioned drinks – cocktails with Nile Sunset Annex with Absolut Elyx mixologists and coffees and teas by Manal al Dowayan as remedies for the malady of love.

Dinner guests are drawn deeper into an inner dining room, where mezzes are foraged and served from an installation in collaboration with The White Boutique. Larissa Sansour’s appetizers re-imagine plants that are often forbidden to harvest in Palestine, while the artist-duo, the Centre for Genomic Gastronomy, reinterpret another soon-to-be extinct dish. The main courses shift the focus from the natural world to art world, responding to the three stages where love becomes destructive and all-consuming.  Candice Lin invites guests to smash open and consume effigies representing power relationships in the art world.

The culmination of the evening centres on the concept of Tadleeh (disorder); the stage of love that causes one to lose his or her sense of reason. Taus Makhacheva’s finale re-imagines one of the most anticipated moments in a traditional wedding – the cutting of the cake – which allows participants to consume the impossible.

The Wedding Project is commissioned by Art Dubai Projects and sponsored by Absolute Elyx with further support from ROI Land Investments Ltd. and The White Boutique.