The world’s slowest-growing cactus and other stories 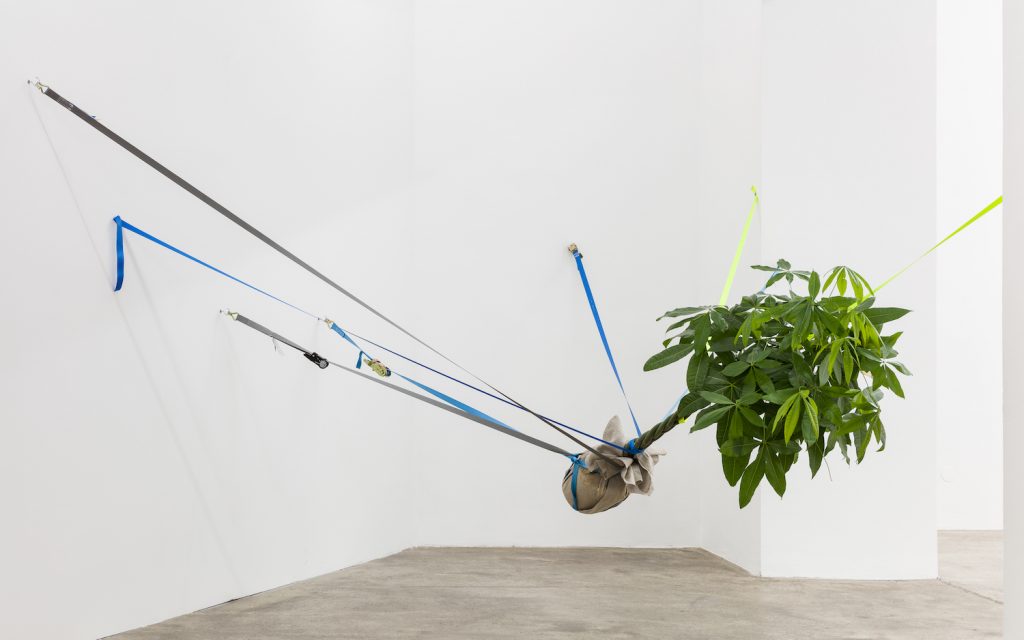 What kind of plants interest you? – asks Trevor.

Our shared fascination with plants seemed like a generous and grounding subject to start and expand from during my ‘studio visit’ with Trevor Yeung, which took place in London during his residency at Delfina Foundation. By talking about our individual rituals of tending to we are able share something about how we relate to the world and where we each feel rooted (or as it happens, temporarily uprooted,) in it.

Trevor talks about his plant collection back in Hong Kong. He started with a Venus flytrap at college (Respect! They can be quite tricky to look after!). In the years thereafter he cultivated his interest further through collecting rare palms and cacti. He even managed to get hold of the world’s slowest-growing cactus – an Aztekium valdezii (growing no more than 3mm/year). Even a small piece the size of my thumb – he says – might be older than both of us combined.

I wonder about the relationships we develop with plants and probe Trevor seeking to understand his own approach. Is his motivation food? A skill? Community? A scientific enquiry? Or beauty? While I get no one answer I start to get a glimpse into his wealth of knowledge and passion about the lifecycles of plants, their unique forms and characteristics. These are of course intimately intertwined with his interest in cultural history and the human condition which he unfolds through personal stories both in this conversation and in his work.

He expands on one of his favourite plants, Welwitschia mirabilis. It is endemic to the Namib desert in Southern Africa and is often referred to as a living fossil because of its ancient form. The plant stays close to the ground and only produces four leaves across its entire life. A seedling grows its first two so-called cotyledon leaves to start, then subsequently two larger permanent foliage appear on opposites sides at the edge of the crown. These may eventually reach up to 4 metres in length. The tips of the leaves split into smaller parts as they get older and damaged by wind and other conditions, but the Welwitschia does not produce any others. This is very unusual, a remnant from an earlier stage of evolution, as with many plants, you can take a cutting from an existing plant and propagate it, and the parent plant will recover by producing new leaves. But not this one. It is ever so human this way.

Trevor is worried about his plants back home as he thinks about his distance from them. He recounts their different origins and ways they arrived in Hong Kong. The transport conditions, temperature fluctuation and the weather that some of his rare specimens were exposed to on their journey, sometimes halfway across the world, which fundamentally affected whether they could survive and eventually strive in his studio and rooftop garden. As soon as it arrived, I tried to revive it – he says narrating his own encounter with a Welwitschia plant – I tried to help it acclimatise by giving it heat and adding humidity to the air, I did everything I could, but sometimes nothing works. This one had just experienced too much of a shock already.

I am met Trevor close to the end of his three-month residency at Delfina Foundation in London where he arrived with the intention to visit some of the world’s oldest botanical gardens and medical plant collections located in the centre of the colonial empire that is Britain. These research trips included Kew Gardens, to see the collection of objects and equipment that were used to transport specimens on long journeys from faraway lands, such as the Wardian cases, a sort of sealed box made from wood and glass. Wardian cases are a bit like aquariums, comments Trevor, you can control the whole system. I didn’t get this reference straight away, but later I learnt about his recent project with fish.

His piece Live in Hong Kong, Born in Dongguan from 2015 is an installation comprised of a series of fish in separate tanks, each with a different place of origin and controversial story of arrival in Hong Kong. Their journeys highlight the complexities in the global circulation of fish and other exotic species be it by legal means, through obscuring the origins through repeated re-selling, or somewhere on the scale of (semi-)illegal smuggling. These uniqueness of the back stories of each of the fish’s arrival in the city resembles those of people who make up Hong Kong. The work is also a metaphor for the artist’s complicated relationship with his own background: he was born in China and growing up in Hong Kong as a mainlander was sometimes a source of anxiety.

Talking more about Hong Kong, I learn about its history as a trading harbour giving a strong sense of identity to the people of this region. Trevor’s recent research and projects on oud production are also based on this heritage. The city has been known for trading incense since ancient times, in fact, “Hong Kong” is the phonetic translation of the Cantonese name, which literally means “Fragrant Harbour”. The highly prized oud is a dark, dense and fragrant resin produced by the agar tree when damaged in order to protect itself from infection. The production of oud therefore has a violent history emanating from deliberate harm. After the resin is extracted, the collectors would also often cut and sell the wood too. As Trevor points out, the plants scarred bodies evoke strong emotions but also complex cultural histories.

We continue to unravel numerous more stories from the entangled forest of plants and culture. Trevor’s artworks often derive from how a plant’s form can be directly influenced by social and cultural relations and vice versa. Through the shape of a plant, you can start to imagine the circumstances that produced it. They make sense in situ, he explains. He recently encountered a unique and recognisable tree near Jack Straw’s Castle in Hampstead Heath, a famous gay cruising area in North London. The trunk of the tree has been bent to be almost horizontal as it has lent itself to people to lay on night after night for decades. It has been polished shiny by bodies in desire, shame and pleasure.

We end by talking about his 2019 exhibition titled Typhoon no. 9 at Galerie Allen in  Paris. The works evoke the feelings of being exposed to the elements and other outside circumstances (be it the weather, socio-political atmospheres, or Covid restrictions), and trying to weather them by staying inside, hoping for the best. It is about those moments of waiting for everything to be back to normal. We know that we are safe right now, but there is much anxiety and uncertainty about things to come. Trevor tells me about the Pachira plant he used in the installation. They are a very popular houseplant, a tropical wetland tree which you often see in garden centres with braided trunks, like the one in his installation Suspended Mr Cuddles (2019) held mid-air by ratchet straps. As the trees grow, the tensions in the trunk start to mount; not dissimilar to the way prolonged lockdowns can strain relationships.

As a society we make many references to weather: as niceties upon meeting, because of the seeds and plants we hold precious, as metaphors for political tensions, and perhaps most seriously in relation to climate change. At the end of the studio visit, I think about “weathering” as described by Astrida Neimanis and Rachel Loewen Walker, who use the word to reduce the distance between the enormity of climate change and the immediacy of our flesh. Accordingly, I imagine the plant bodies we discussed, as well as our own bodies, as archives of climate, stretching between present, future, and past weathering the world together.

– Borbála Soós (b 1984, Budapest) is a UK-based curator and an active advocate, participant and organiser of artistic and ecological research. She is currently a PhD candidate at Goldsmiths College’s Art/Visual Cultures Departments.